Could the Secret to the Meaning of Life Exist Within Tide-Pods? 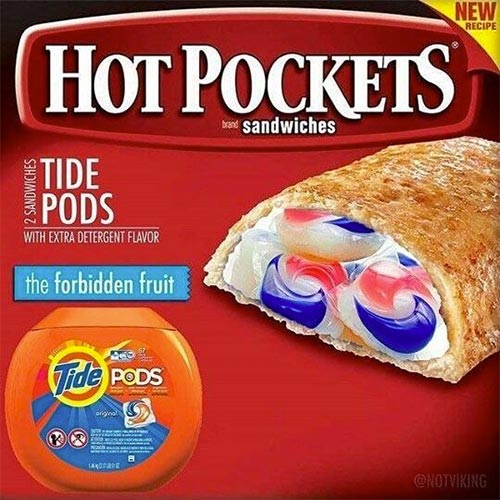 The recent uproar in the mainstream media regarding the latest teenage trend of eating Tide-Pods, the individually-plastic-wrapped colorful candy-like looking laundry detergent, has some conspiracy theorists wondering if Tide-Pods actually contain the meaning of life.

The Tide-Pod Challenge comes after a slew of other teenage rebellions including but not limited to the gallon challenge, the cinnamon challenge, the bath-salt challenge and the classic drinking-jungle-juice-from-a-bathtub challenge. All of which were just steps up the ladder to truly understanding the meaning of life.

That is, many humans between the ages of 13 and 19 have a hard time wrapping their minds around the idea that death is a certainty– the Tide-Pod Challenge helps them on their way toward enlightenment, aka recognizing their own mortality, aka seeing the other side, aka realizing that life is one big joke and it ends when they eat a piece of plastic containing not just soap, but what could only be construed as a chemical lab-made poison. That “fresh rain” smell, that “tropical ocean” smell, that’s not natural, that’s all made up by scientists who get paid a lot of money to make soap that is probably more likely to cause cancer than prevent it.

“When clothes come out of the laundry with that fresh smell all humans seem to enjoy, well, I made up that fresh smell,” says, Corporate Chemist, Connelly Dickson, 42, “The truth of the matter, grocery-store laundry detergent would cause damage and/or potentially kill any breathing creature that consumes even a small quantity of it.”

“Maybe the younger generation just gets it, you know?” says guy who still lives in his mom’s basement, Josh McGosh, 37, “maybe there’s something in these pods. We don’t really know until we try. The government and the mainstream media could be working in cahoots trying to keep us from eating them when really they exist to change our lives.”

Upon hearing McGosh’s claims, “No. Nope. Eating laundry detergent will indeed kill a person,” Dickson concludes. “So, yes, it will change a person’s life, in that they will no longer have one.”

Yet, what is death anyway? No one really truly knows. Perhaps people of Generation Z understand more about it than anyone else. Perhaps the other side is better than this one. They are growing up in the Trump era after all; who could really blame them for wanting to take this sort of exploratory leap? Life, money, time, non-edible tide-pods, it’s all just social constructs anyway.
To report exposure to laundry detergent pods, call the national poison hotline at 1-800-222-1222 so you can go back to living a meaningless no-enlightened poison-free existence. Or text POISON to 797979 to save the number on your phone and get to it later.